After the age of 13, I have always had some sort of job. I've sold furniture, tagged jewelry, babysat, dental assisted, and camp counselered.  At some point, I asked myself what I want to be when I grow up. After due deliberation, the answer became 'Speech Pathologist'. So I became one. For seven years, I worked full-time in a special education preschool in Queens, New York. Then I got engaged and planned to move to Israel. And so, I was forced to leave my happy, safe job. A job at which I was respected for my clinical know-how. A job at which I felt I had become an 'experienced clinician'.

Something happened to me when I moved across the Atlantic. A lot of changes were going on for me all at once; I was a new bride, acclimating to a new culture, and speaking to my husband and his family and everyone else in Hebrew, all the time. For the first time in my adult life, I felt I needed a break from work. I simply needed the time to absorb all the new things that were happening to me. I soon realized, however, that my 'break' wasn't going to be so restful. I was spending my days at home with my mother in law. There were awkward smiles as we passed eachother in the hallway. There was unsolicited advice about doing my laundry. In short, I was feeling the need to GET OUT OF THE HOUSE. It was time for me to become an Israeli Speech Pathologist.

I figured 'Hey, my Hebrew is perfect, my husband and I speak Hebrew at home, how hard can this be?' I'll tell you. It was really hard. During my first interview, I was served a generous slice of humble pie, which was not very tasty, and which I was forced to eat; my Hebrew was most certainly NOT perfect. I didn't understand some of the questions they asked me, and I had to nod and pretend, which of course they saw right through. Let's just say, I didn't land that job. It was then that I realized that 'professional/higher language Hebrew' is different than 'can you pick up some tomatoes at the makolet' type Hebrew. Then came my second interview. I must have practiced a question/answer session in my head before that one, because it turned into my first job. And that first job, I soon realized, would be quite challenging, to say the least. At least for a while.

Imagine this: It's my first day. I arrive, and there is a group of staff members gathered in the front office, drinking coffee and making small talk. I remember being mad at everyone there. I knew they spoke English, were they just speaking Hebrew to be evil? I poured myself a cup o' joe, and thought, "I don't need this. Where's the wine?". I was nervous. Then, the menahelet (program director) announced that there'd be a 'yeshivat tzevet' in the back room starting in ten minutes. No problem. I understood almost that whole statement. Except just one thing: What does 'yeshivat' mean and what does 'tzevet' mean, please? My throat closed up, and I fought back tears. My ears started ringing. I felt numb. When everyone started filing out of the office, I followed suit, and I surreptitiously asked the only other English speaker on staff what was happening. Sensing my discomfort, she quickly replied in hushed tones "staff meeting". Okay, first tragedy averted. The next tragedy was the meeting itself. Imagine being at a staff meeting, where you are meant to be an integral member of a team of health care providers for autistic children, and you have NO CLUE what is being discussed. I felt sick. I was an experienced clinician. I was used to contributing ideas and professional knowledge during meetings, even giving in-services and teaching other clinicians. Now I was an immigrant in unfamiliar territory with a fake, sad little grin, and flushed cheeks.

When I got home that night, I looked at my husband. He knew something was wrong. In the middle of the first sentence I spoke to him, my voice cracked. I spent the next hour or so crying to him, relaying this nightmarish experience, explaining to him how it is completely hopeless, and how I will never succeed doing speech therapy in Hebrew. But then, being the wonderful husband that he is, he asked me to tell him what I did not understand. I wiped away some tears and opened my binder to look at some of the meeting's notes. I did have a list of 'new words' that I wrote down, and he explained what they meant. Amazingly, that helped to clarify some key points that were discussed at the meeting. I stopped crying, and started relaxing. Hmmm... maybe I COULD do this...

And so I got on with my job. Yes, there were parents who asked that their children be switched to a 'native Israeli Speech Therapist'. Yes, report writing was a nightmare at first. But I continued making my 'new word' lists, and I became accustomed to using my handy dandy Hebrew-English dictionary. I actually began enjoying it. I remembered that I love languages, and I felt a sense of accomplishment as I realized I was learning several new words every day. And there was always my husband to proof-read reports and help with fine-tuning my sentence structure. My fluency was improving, and slowly, I began feeling more confident during therapy sessions, even with parents present.

I am now beginning my 6th year practicing speech therapy in Israel. It's hard to fathom where I started out, and how far I've come. I'm not exaggerating when I say that making the switch to doing speech therapy in Hebrew was fraught with hardship, fear, and even dread at times. And I can't help but be proud of myself for having done it. 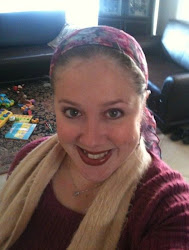